This is a variation on the traditional ‘Battleships‘ board game, but designed to practise pronunciation.  I’ve used it with my own students many times and they always find it challenging and engaging.

The game involves learners very carefully articulating words in minimal pairs so that their partner can understand precisely which word they’re saying.  The idea is to include words in the game which contain sounds that are typically difficult for particular learners of English, depending on their first language background. 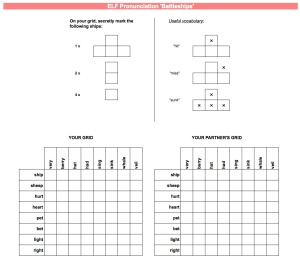 Of course, practising minimal pairs over and over and over again has the potential to be mind-numbingly repetitive – but when done in a competitive game format, it’s much more fun!

And there are generic boards for the Lingua Franca Core and for one commonly difficult aspect of it here:

To better understand what makes up the ‘Lingua Franca Core’, check out this post.  If you want a printable one-page version for your own reference, you can download one here.

Of course, if you teach a group of students from various L1 backgrounds, you might like to create your own bespoke game grid that caters for their different L1s, so they can practise understanding and being understood in a true ELF environment.

In this case, we will soon be making available for download the original file used to create the above game boards.  It includes lists of appropriate words for 12 different first language backgrounds and a blank game grid so you can make your own bespoke game boards.  There are instructions on how to do so in this video.

For your own reference, the file also includes notes on the Lingua Franca core (i.e. the basis of the words selected for inclusion in the game), as well as a bibliography of all the linguistic sources which this data has been based on.

If you aren’t familiar with Battleships and don’t know how to play, read on…

How to play ‘Battleships’

How to set it up:

1. Each student gets a copy of the whole game board (one A4 page).

2. To start with, each student prepares the part marked ‘YOUR GRID’: 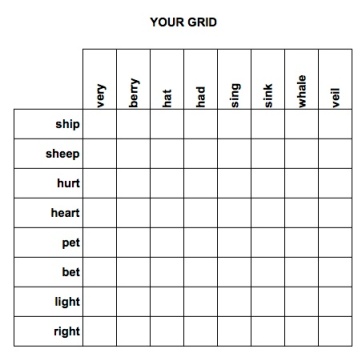 3. Individually, they mark 1 big ship, 2 medium-sized ships and 4 little ships on their own game board, by shading in squares.  They mustn’t show their partner.  When they’re finished, it will look something like this: 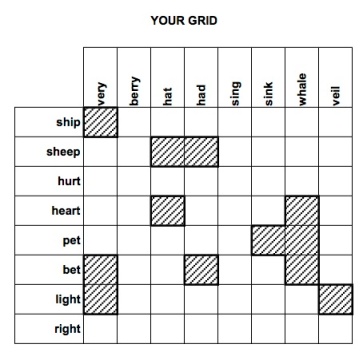 Note: they can rotate the ships if they want; and they can put ships close to each other, as long as the ships do NOT touch sides.  In other words, this is not allowed:

But this is allowed:

1. Keeping their grids secret from each other, the students take turns to guess where each other’s ships are.

2. They can only do this by giving coordinates, one square at a time.  For example (using the grid above), if I think my partner might have a ship in the third box from the left in the top row, I would say ‘hat, ship’. 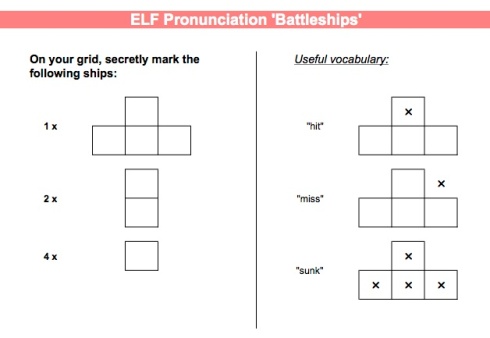 4. If I hit something, I mark that square on the grid labelled ‘YOUR PARTNER’S GRID’ with a small ‘x’, then guess again.  If I miss, I mark that square with a small ‘o’, so that I remember later in the game that I’ve already tried that square.  If I sink a ship, I cross out the whole square with a big ‘X’.  As the game goes on, then, the grid labelled ‘YOUR PARTNER’S GRID’ on my sheet of paper will start to look something like this: 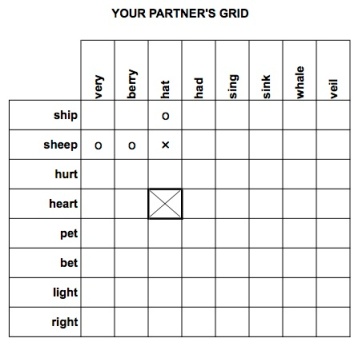 As you can see, I have sunk one of his small ships and am in the process of finding another.

AN IMPORTANT NOTE ON CHEATING:

The main points of the game are (1) to practise articulating sounds very clearly so that listeners can differentiate between similar-sounding words, and (2) to practise articulating particularly challenging sounds.  So if a student cannot tell what word his/her partner is saying, the partner must clarify by contrasting the two confusing words, and not by defining which word they mean or giving other clues which allow them to avoid the pronunciation challenge!

Example: Student A says hat.  Student B isn’t sure if Student A said hat or had.  So Student B asks: “Hat or had?”  And Student A clarifies, “Not had.  Hat.”

5. The game finishes when one student has sunk all of his/her partner’s ships.  Then they can look at each other’s grids.  By this time, the teacher should have had plenty of opportunity to hear which sounds were causing the most difficulty and might require more work in a future lesson.

This site uses Akismet to reduce spam. Learn how your comment data is processed.

Unless specified otherwise, all work on this blog is licensed under a Creative Commons Attribution-NonCommercial-ShareAlike 3.0 Unported License.